THE MYSTIQUE OF CHANEL No. 5 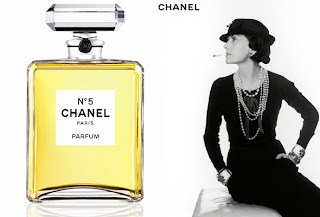 THE MYSTIQUE OF CHANEL NO. 5
By Polly Guerin, Fashion Historian

The world's most legendary fragrance and the House of Chanel's most famous perfume, Chanel No. 5, is not the first perfume to ever have emerged on the fashion scene. Poiret, the fashion designer who freed women from the corset and created slim hip sheaths that were all the rage in the Jazz age, was also the first fashion designer to create a perfume. He worked with chemists to concoct mysterious, Oriental scents. In the l920s/1930s he created the "Poiret" woman with Le Fruit Defendu, Nuit de Chine, L'Etrange Fleur, even Borgia.
However, perfume has a prolific history because women have been known to douse themselves with aromatic scents throughout the ages. The Egyptian women knew a thing or two about beauty as did women of the French court who used perfume to dispel unpleasant body odor. Amazing these noble women did not all bath. Then Victorian women had their fainting spells and scented vials of aromatic arousal came to their rescue.
However, the legend still holds Chanel No. 5 up as the number one perfume that has been on sale since its introduction in 1921. The House of Chanel claims that a bottle is sold worldwide every 30 seconds.
Parisian couturier Gabrielle "Coco" Chanel commissioned Ernest Beaux, one of the most celebrated perfumers of the era, and as we know today these men are called the "Nose" of the industry. Well, Beaux' nose was inspired by his military sojourn above the Arctic Circle during World War in which the perfume attemps to capture the scent of extreme freshness of the northern lakes under the midnight sun. At that time the most expensive perfume oil was jasmine and Chanel wanted to create the most costly perfume in the word, and as a result No. 5 relies heavily on jasmine. There was not one but several formulas presented by Beaux and No. 5 was the one chosen out of a series of ten perfumes presented by Beaux. Cocurrently Chanel was presenting her couture collection on May 5 of that year and the iconic No. 5 was born to a destiny of unrivaled success.
Chanel No. 5 did not take off immediately. Being a woman of unprecedented marketing vision Chanel introduced it first to her friends on May 5, 1921 and it was given to preferred clients free at her salon. Making the scent more recognizable, the fitting rooms of her establishment were scented with No. 5, which as you know, is a tactic imitated by retailers today. Although not the first fragrance to use snythetic floral aldehydes as a top note, it was Chanel's theory saying "I want to give women an artificial perfume. Yes, i do mean artificial, like a dress, something that has been made so that it would make a woman's natural beauty more precise."
Famous spokesmodels for the fragrance have included movie start, Marilyn Monroe, whose mystic boosted its popularity. In 1953 when asked what she wore to bed, Monroe famously replied, "Why, Chanel No. 5., of course." Chanel herself declared, "A woman should wear fragrance wherever she expects to be kissed."
French film sensation, Catherine Deneuve also became the iconic image of the Chanel No. 5 woman as were Nicole Kidman and actress Audrey Tautou who also appeared in the short firm for the fragrance introduced on May 5th, 2009 in honor of the creation of Chanel No. 5. introduced on May 5, 1921.
Posted by Polly Guerin at 7:26 AM