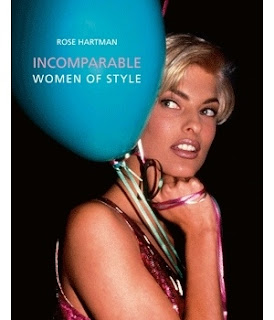 Rose Hartman, the quintessential photographer is seen here, seen there, quite frankly she seems to be seen everywhere , and in the course of her journey as a photographer she gained exclusive entre into the world’s most fashionable happenings and access to celebrities and movie stars. One would not have suspected that this powerhouse of energy, determination and drive could have started out in life as a teacher, but she honed her skills and studied the art of photography and from then on she parlayed herself into the good graces of the all-powerful publicists and gained entry to cover the most exclusive clubs, parties and events. And therein is how over the years Rose Hartman was at the forefront of world’s fashionable events from New York to St. Petersburg and Mumbai and beyond. During her remarkable career she has accumulated a vast archive of memorable images and has authored a book, INCOMPARABLE WOMEN OF STYLE, recently published by the ACC Publishing Group.
A GORGEOUS VOLUME The gorgeous volume features more than 100 photographs, including rare vintage silver pints developed by Hartman in her home studio, as well as never-before-seen image of New York City’s underground style icons. She has captured the trend setters for three decades, and in so doing has helped to chronicle and define what we remember most about glamour and those who create Incomparable Women of Style includes both iconic and rarely seen pictures of Nan Kempner, Marisa Berenson, Jackie O, Brooke Astor, Anna Wintour, Paloma Picasso, Diane von Furstenberg and Daphne Guiness, just to mention a few. Her images are never set up, never staged, instead Harman says, “I wait until I see an expression that moves me and then I shoot-not before, not after. I want as much spontaneity as possible.” And that is what makes this book so special; the spontaneity of the images is both riveting and captures a moment in time.
PHOTOGRAPHER PAR EXCELLENCE With her photographs appearing in worldwide books and magazines, Hartman has distinguished herself as a photographer of keenest ye; even her candid works has the finish and insight of portraiture. What one fails to realize is that many of the photographs associated with style, an event, and an era, have belonged to Hartman, whether it is Bianca Jagger on a white horse as she enters Studio 54, or Isabella Rossellini at a private dinner in the Hamptons. 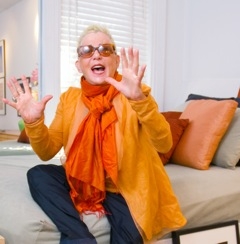 IN THE BEGINNING Rose Hartman is a true New Yorker. She was born in Manhattan’s East Village but started to patrol the night scene in 1975 as an arts and society columnist at the SoHo Weekly News. Her first big break was a photo shoot of Joan Hemingway’s wedding in Sun Valley, Idaho where she manage to induce Ernest Hemingway’s wife, Mary, to pose for her relaxing in a hammock. You may not have realized it but her photos have been published in Vogue, Glamour, Vanity Fair, Art & Auction, Harper’s Bazaar, Der Spiegel and many, many more magazines

Posted by Polly Guerin at 7:56 AM No comments:

Anyone who wanted to enter the Emerald City in the Wizard of Oz was made to wear green-tinted eyeglasses, as an effort to protect their eyes from the “brightness and glory” of the city, but it really just made everything green. Now the emerald era dawns on us once again as fashion decrees “Emerald Green is the color the year 2013,” in fashion, accessories, furnishings, appliances, automobiles and even aviator sunglasses with green polarized lens. This lively, lush, radiant green, number 17-5641 in Pantone’s LLC’s numerical lexicon is the color of beauty, hope, healing and prosperity. Its greatest attribute is that of renewal, rejuvenation and new beginnings, a change for the better. Good reason to adapt emerald green next year.
THE GREEN REVOLUTION Just when we thought that the 1980’s green was a thing of the past its recall encompasses a wide swath of products ranging from fashion on the runways like sporty pants suits, dresses and evening gowns. Le Creuset embraces the color and is already selling a full range of cookware in deep green, it calls ‘fennel,’ while Waterford glassware sparkles in green crystal and GMs Chevrolet Camaro concept car is a color they call ‘unripened green.’ Of course, emerald jewelry would make any woman glow with radiant charms. Sleeping in a bed of green JC Penney’s home department will be lush with green components; sheets, bath towels, rugs and bath accessories.
SYMBOLISM OF GREEN Emerald green is a refreshing change in the color spectrum. It conjures up lush foliage, the renewal of spring, the harbinger of hope and happiness and the preserver of unconditional love. It also represents abundance; after all it is the color of money, too. Green is a good omen for 2013 as it is the color of harmony, balance and peace. People who gravitate to green have personality traits that include understanding, compassion and generosity. They are nature loving and also have romantic inclinations. To let go of stress picture yourself in an open field of green grass and visualize calm washing over your body bringing with it healing, health benefits.

DIAMONDS MAY BE FOREVER, BUT AN EMERALD ENGAGEMENT RING BRINGS WITH IT UNCONDITIONAL LOVE. BORN IN MAY, EMERALD IS THE GEMSTONE OF CHOICE!!!

Posted by Polly Guerin at 10:38 AM No comments: