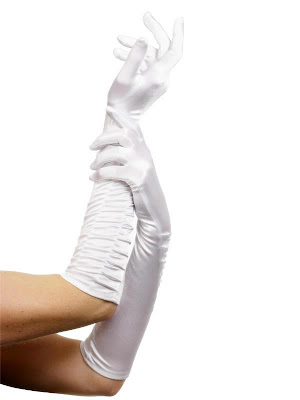 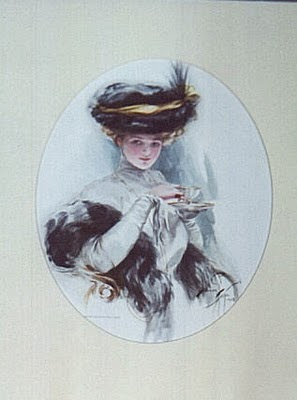 Gloves, an indispensable accoutrement of elegance, have had their place in fashionable society as items of feminine coquetry, romance and duels of honor. Historically they were emblems of status and power, worn by royalty and church dignitaries. In ancient times gloves served their purpose as a protection and embellishment. Today, however, the importance of the glove seems to be relegated to whims of fashion, worn with wedding dresses or gala balls.
THE SIXTEEN BUTTON GLOVE
Imagine the fashion of the sixteen button opera glove, popular in the nineteenth century, as a subject of sensual intrigue. It could take an hour just to put on a pair of these gloves, requiring the use of glove stretchers, powder and button hooks. With the absence of a lady’s maid, each little button had to be undone by a lover who knew how to kiss the revealed arm of his amorata with passionate pause. Such a scene of patient anticipation could easily be re-enacted in a romantic novel.
GLOVES IN FASHION
Every once in a while models sashay out in fashion shows wearing gloves, but it still doesn’t do much to entice women today to complete their outfit with gloves. Instead, gloves seem to go back to their original purpose and appear in cold weather, more as a protection rather than making a fashion statement. However, in the Renaissance, fashionable women wore opulently embroidered and perfumed gloves of silk, linen, and kid leather. A woman might carelessly, but intentionally, leave a glove behind her indicating that she expected to be followed.
ANCIENT GLOVES
The gloves of kings and church nobles were richly ornamented with gold, silver and precious stones. They were part the investiture of a knight. A gauntlet flung down in front of an adversary was a challenge to battle or a duel. Ancient gloves were luxuries of the privileged classes, while the peasants wore coarse working mittens. If ever there was a glove fetish collector Queen Elizabeth 1, who ruled England during the sixteenth century, was one. So fond of gloves she amassed more than 2,000 pairs, which were maintained by a wardrobe mistress. Napoleon was another great lover of gloves and encouraged his Empress Josephine, and the ladies of the court, to dress in the height of fashion.
THE ENTERTAINMENT NOTABLES
Mme. Sarah Bernhardt was one of the great glove-wearers of all time. She was responsible for popularizing the over-the-elbow gloves which she wore on one of her American tours. Not to be outdone Lillian Russell, the famous New York society beauty and actress was also known for influencing glove trends, particularly wearing fingerless white kid opera gloves. Similarly another entertainment notable, Michael Jackson did a lot to promote the penchant for wearing one glove and admirers adapted the look.
THE VICTORIANS
Elongated kid gloves, called mousquetaires, were so skintight in the Victorian era that many young women squeezed their hands into a size smaller to achieve an elegant look. It was acceptable, and positively an alluring sight, for ladies to slip their hands out through the button- or snap-fastened wrist opening of long kid gloves to eat or drink while keeping the glove itself on. Harrison Fisher’s painting, “Girl Taking Tea in Gloves,” illustrates a young woman’s ability to nonchalantly dine while wearing gloves.
NOWADAYS GLOVES COME IN A WIDE VARIETY OF MATERIALS COLORS AND LENGTHS. FABRIC GLOVES BEGAN TO BE WORN AFTER WORLD WAR I AND BY THE 1950’s WHEN WOMEN WOULD NOT LEAVE THE HOUSE WITHOUT A HAT, GLOVES AND HANDBAG, SYNTHETIC MATERIALS BECAME AVAILABLE REPLACING LEATHER TO SOME DEGREE.
Posted by Polly Guerin at 10:18 AM No comments: