FASHION: HIS & HERS (c) by Polly Guerin 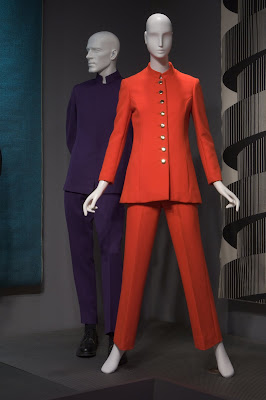 In her book, It’s Still Spinach (1954), fashion designer Elizabeth Hawes noted that American women usually wore skirts, while men almost always wore trousers. This edit seems to reflect common belief that most people dress in ways that they consider to be appropriately “masculine” or “feminine.” However, perceptions of gender vary according to place, time and individual experience, and no clothing style or color is “naturally” linked to one gender or the other.
A GROUND BREAKING EXHIBIT
The Museum at the Fashion Institute of Technology presents HIS & HERS, a new exhibition that examines the relationship between gender and fashion. Side-by-by side comparisons of men’s and women’s clothing highlight the differences—and the similarities, through May 10 at the Museum at FIT, 27th Street and Seventh Avenue. Beginning with the 18th century and leading to the present the exhibit explores the so-called unisex and androgynous dress, as well as the developments in cross-gender appropriation. While skirts, for example, are generally regarded as “feminine” garments in Western culture, garments such as kilts and sarongs are common attire for men in other parts of the world, and in recent years, Western designers such as jean Paul Gaultier have created skirts for men.
THE OPULENT ERA
The exhibitions chronology begins with a brocaded silk court dress circa 1760 which is displayed alongside an elaborate embroidered velvet man’s suit from circa 1785. At that time, aristocratic dress for both men and women featured luxurious fabrics with lavish adornments that are today usually considered “feminine.” The opulence of the 18th-century menswear provides an interesting counterpoint to the generally staid men’s fashion of the 19th –century. During this period, day and eveningwear for men was typically dark and somber, while women’s dresses were brightly colored. However, men did wear exotic garments at home.
THE 20th CENTURY
Moving into the 20th –century, His & Her features a sporty, checked wool man’s suit from the 1920s paired with a checked silk day dress by Louiseboulanger. In the 1930s, women’s preferences for broad-shouldered suit actually preceded a similar trend in menswear. The “Peacock Revolution” of the 1960s, transformed menswear. Meanwhile, many women began wearing miniskirts, as well as trousers for day and evening. I remember being denied entrance to a posh restaurant in those days because I was wearing a pants suit.
THE POWER SUIT
By the 1980s, the growing presence of women in the workplace resulted in the creation of women’s “power suits.” A typical example is Yves Saint Laurent’s version with “feminine” details, such as a soft bow tie and playful animal print, alongside a man’s power suit by Alan Flusser.
Pictured above: Purple wool man's suit by Jacques, c. 1965, and red wool woman's suit by Tape measure, c. 1967.
ALTHOUGH MANY CONTEMPORARY DESIGNERS CONTINUE TO SUBVERT GENDER CODES IN VARIOUS WAYS, MOST COLLECTIONS TODAY ARE STILL CLEARLY DEFINED AS MENSWEAR OR WOMEN’S WEAR. NEVERTHELESS, SOME DESIGNERS CONSIDER BRIDGING THE MALE/FEMALE DIVIDE TO BE FUNDAMENTAL TO THEIR WORK.
Text Credits: Colleen Hill and Jennifer Farley, curators, The Museum at FIT
The Museum at FIT: Hours Tues-Fri.-noon to 8 p.m. Saturday 10 a.m. to 5 p.m. Closed Sunday, Monday, and legal holidays. Admission is FREE.

Posted by Polly Guerin at 10:08 AM No comments: