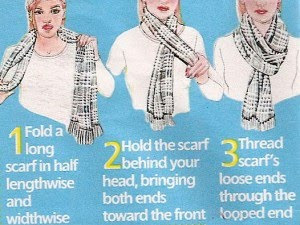 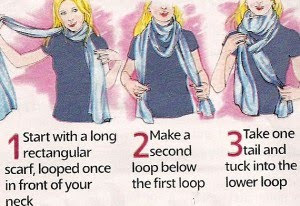 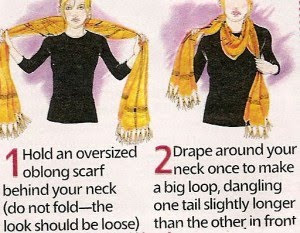 It's A WRAP
The quickest way to give any outfit a touch of drama, a splash of color or to add punctuate your wardrobe with style and chic is to tie one on with a fashionable scarf. Although silk is by far luxurious come chilly weather cashmere blend wools, and cozy synthetics make scarf attire the ultimate fashion accessory. It’s a reasonable investment and has become a must-have item for women around the world. As scarves grow ever popular with society’s celebrities convey sophistication and elegance. In addition, they have the advantage of flexibility in how they are worn—around the neck, tied at the waist as a flashy belt, worn as a head covering a la Jackie Kennedy or even tied to a handbag like a badge of fashion aplomb.
A STYLE OF POSSIBILITIES Do you envy the way Hollywood stars can wear scarves and just look so trendy and cool? Duplicating the look is easier than you think and www.coffeebreakwithlizandkate.com has some easy to follow instructions:
LOOP DE LOOP: Choose a color that matches your coat or jacket. Fold a large oblong scarf in half lengthwise. Hold the scarf behind your head and bring both ends toward the front. Thread the scarf’s loose ends through the looped end and pull and wrap closely around your neck.
IT’S A WRAP: Hold an oversized oblong scarf behind your neck (do not fold—the look should be loose) Drape the scarf around your neck once to make a big loop, and let booth ends dangling one tail slightly longer than the other in front.
THE DANGLER: Start with a long rectangular scarf, looped once in front of your neck. Then make a second loop below the first loop. Take one tail and tuck it into the lower loop, dangle the ends.
HISTORICAL SCARF NOTES
Experts say that the scarf marked the rank for warriors of the Chinese Emperor Cheng. However, leave it to the French to take the scarf to new heights of importance. They became so enamored with scarves that men began to wear them, tucked into their neckline, calling them cravats, from the Croatian work kravata. Men also demonstrated their political inclination by the color of their scarf. In the 19th century European silk suppliers start to offer bands and ribbons as well as scarves, but it took the French Hermes house of luxury brands to adapt the silk used in jockey’s blouses to produce their first silk scarf, “Jeu des Omnibus et Dames blanches,” in 1937. After that the silk scarf took its turn as a fashion statement and continues its role as a status badge of fashion chic.
Don’t let the fashionistas steal the spotlight. Bundle up in scarf style and give your outfit an added dash of sophistication.
Posted by Polly Guerin at 8:17 AM No comments: