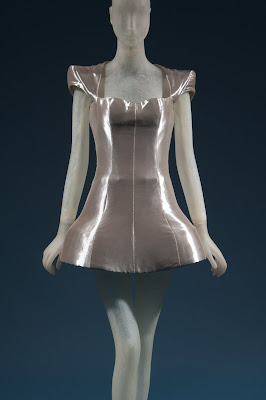 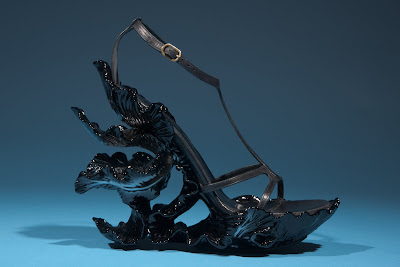 Shoe and dress by Alexander McQueen 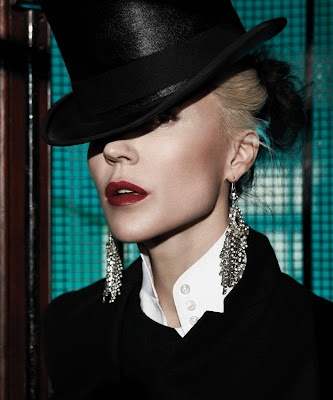 Throughout history there have been celebrated women of style, but Daphne Guinness, a brewing company heiress, couture collector, and style icon is a special type of fashion insider. She not only inspires designers and brings their clothes to life, but Daphne actually re-invents looks that affect the way the fashion cognoscenti dress and/or think about dressing. She has re-invented herself using fashion to transform herself to become a creative force in her own right. Art historian, John Richardson puts it: “She’s the object of her own creativity. Her persona is her own masterpiece.” If you’re like me hovering in the classic rung of the fashion ladder you may ask, “Why should any of us care about what DG does? It becomes clear at the exhibit at The Museum at FIT in New York City that Daphne Guinness, the most stylish woman living today, can turn even a basic into a head-turner. The exhibit on view through January 7, 2012 features approximately 100 garments and accessories from Guinness's personal collection, plus films, videos and image of and by her.
DESIGNER CONNECTIONS A close friend of the late designer Alexander McQueen, the exhibition includes more than a dozen McQueen garments that have never been displayed. “I wish he was still here, he was part of my real friends. It wasn’t just about making clothes; you’re feeding off each other.” Daphne Guinness is also credited with inspiring some of the world’s greatest couturiers from Karl Lagerfeld to Valentino. Also featured is an extraordinary haute couture from Chanel, Dior, Givenchy, Lacroix, and Valentino, as well as demi-couture from Azzedine Alaia, Tom Ford, Dolce & Gabbana, and Rick Owens, and futuristic styles by young designers and clothes that Guinness has designed herself that show her love of uniforms. The breathtaking wide range of exceptional accessories, many which were created in collaboration with Guinness include Philip Treacy’s hats and Shaun Leane’s “armor” jewelry, not to mention towering platform shoes made especially for her by Christian Louboutin and Noritaka Tatehana. GUINNESS’S INSPIRATION When questioned: “Who did you most admire?” Daphne replied, “Diana Vreeland, she lived her clothes. In contrast to Vreeland who lived her clothes, Daphne added, “Some people put things on, but they don’t feel that they are part of them. With style you learn and adjust.” The Duchess of Windsor, Nancy Cunard, and Josephine Baker were other style icons Daphne mentioned. She added, “I am also inspired by books. I will envision what the heroine is wearing. I’m always going back to the basics in literature and art and I am an Old Master fan.” DAPHNE’S VIEW ON COLLECTING When asked “How to you approach collecting?” Daphne replied: “It has to be something so original it sparks something in you, reacting ‘Wow that’s something new and exciting,’ I was the first with skulls, but when skulls became mainstream I gave them up. I’m connected to music; rock and roll and fashion are very related. Music in the 60’s influenced a whole generation way of dressing. However, I feel that there’s a new movement seems to be happening in fashion now.” CREATING INDIVIUDAL STYLE “I would not say one style is better than another,” Daphne said in reply is the question, “Is there more of an opportunity today for individual style. Daphne: “Sometimes I feel that there is enormous pressure that some people feel that they must dress a certain way to be validated. Fashion hats and gloves may not be necessary but they are now fascinating. I always wanted to wear men’s suits. When cut right you can put it on again, again and again because the structure is good.” From her platinum-and-black striped hair to her towering ten-inch heels, from her to die-for couture collection to her amazing jewelry, Daphne Guinness completely embodies the rarified personal style of a fashion icon.
Several of Guinness’s films are shown, including The Phenomenology of the Body (which explores the politics of clothing), Mnemosyne (which was inspired by her perfume, and Tribute to Alexander McQueen, as well as numerous images and videos.
The museum’s annual fashion symposium, Fashion Icons and Insiders, November 3-4, 2011 will take place in conjunction with the Daphne Guinness exhibit
Posted by Polly Guerin at 8:25 AM No comments:

Labels: Guinness Daphne Collection at The Museum at FIT in New York City 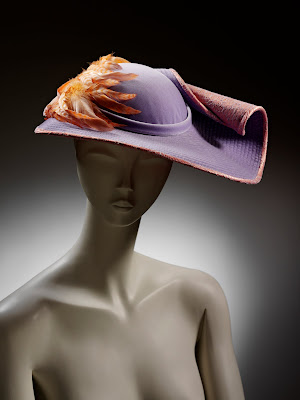 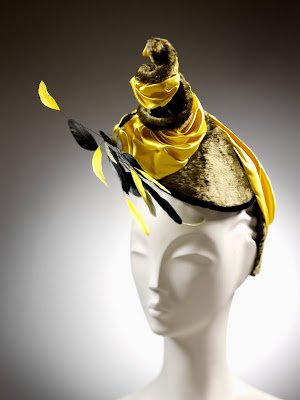 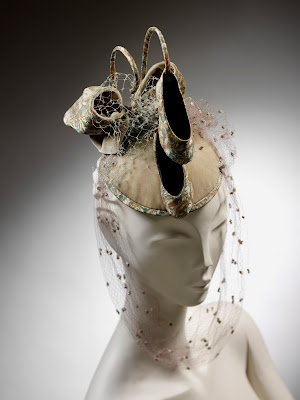 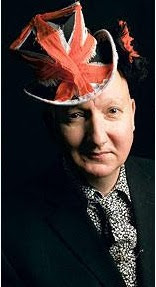 Who would ever predicted that a young boy growing up in the 1960’s, who aspired to be an astronaut, would one day become the British Mad Hatter, Stephen Jones, whose celebrity is synonymous with the millinery he has created for the fashion cognoscenti, superstars and royals. Stephen Jones burst on the London fashion scene during the explosion of street style in the late seventies and his oeuvre has proliferated into millinery stardom. He is considered to be one of the world’s most radical and important milliners of the late 20th and early 21st centuries. No wonder Jones was selected to co-curate the 2009 exhibition Hats: An Anthology for the Victoria & Albert Museum and to return triumphantly to New York to present Hats: An Anthology by Stephen Jones, a collaboration between the Victoria & Albert Museum and Jones, which opened September 16, 2011 at the Bard Graduate Center of Decorative Arts, Design History, Material Culture in New York City. BECOMING THE CELEBRITY MILLINER Jones was one of the original style-blazers of fashion and opened his first millinery salon in the basement of a trendy store in Endell Street in the heart of Covent Garden. “Overnight I had a business,” Jones commented in 2008. The Stephen Jones mystique and his ability to create iconic styles drew to its atelier rock stars to royalty, from Boy George to his regular client followers from Blitz and even Diana, Princess of Wales as a regular customer, to give them the head turning headgear that would make arresting headlines. His celebrity on the rise, Jones had a hat commissioned by the Victoria & Albert museum for their newly refurbished Costume Court, which was the beginning of Jones’ long and fruitful relationship with the V&A. RED CARPET CONNECTIONS Jones’ prolific oeuvre brought his creations to the fashion world creating hats for the catwalk shows of many leading couturiers and fashion designers including John Galliano at Dior and Vivienne Westwood. In 1984 Jones relocated his studio to Lexington Street and that year Jean-Paul Gaultier invited him to Paris to make hats for his show and subsequently he received full credit for his hats thus assuring that the Paris cognoscenti was made aware of his hats. It was inevitable that Jones would enter the retail arena and in the same year he also sold his first designs to a department store, Bloomingdales in New York. From the red carpet to fashion runways to race courses, garden parties and fashion magazine covers millinery by Stephen Jones are crowning achievements of originality, head turners on the fashion and social circuits. STEPHEN JONES TODAY His work is always identified by its inventiveness, its witty statement, its novel approach to subject matter and most importantly its high level of technical expertise. From the catwalk to the couture collaborations Jones’s hats have been an integral component in some of the most memorable runway spectacles of the past quarter century. In addition to his Model Milliner collection, he designs the widely-distributed Miss Jones and Jonesboy diffusion ranges, plus a JonesGirl accessories line exclusively for Japan. His hats are represented in the permanent collections of major museums worldwide and are always at the forefront of fashion on magazine covers and in the window displays of the world’s most celebrated boutiques and retail stores. BECOMING A MILLINERY ICON If truth be told Jones came into the fashion orbit of millinery in quite a serendipitous manner. Jones readily admits his faults and his triumphs, “I attended Saint Martins, but I couldn’t master sewing. However, despite this shortcoming I became an intern in the tailoring department of the London couture house, Lacasse.” However, upon observing the magical haven of creativity elsewhere Jones soon requested a transfer to the next-door millinery department. It was presided over by Shirley Hex and between 1976 and 1979 Jones spent his summer breaks working for Hex and learning about millinery methods and techniques. Jones left St. Martins in 1979 and the same year he became one of the style-blazers at London’s legendary Blitz nightclub himself competing to wear the most outrageous outfits including a pinstripe suit with stiletto heels. Many of the Blitz kids became his first clients, with Jones creating outlandish hats for them to wear to the club. STEPHEN JONES IS POSSIBLY THE MOST ORIGINAL MILLINER TODAY Rising to the heights of creativity Stephen Jones born on the Wirral Peninsula in Cheshire on the 31st of May 1957, and schooled in Liverpool, has propelled his art into the future and continues to attract a celebrity clientele which includes Rihanna, Christina Aguilera, Whoopi Goldberg, and Cher. Hamish Bowles, Vogue USA said, “His genius is to enhance the mystery, allure and wit of the wearer.” Jones was appointed Officer of the Order of the British Empire in the 2010 New Year Honours. STEPHEN JONES AT BARD The show at Bard is comprised of more than 250 hats, the majority of which are chosen by Jones himself from the V&A’s extraordinary hat collection. Visitors will see hats ranging from the twelfth-century Egyptian fez to a 1950s Balenciaga design and couture creation by Jones and his contemporaries. A selection of rare film footage shows the elegant Jacqueline Kennedy, who almost single handedly revived the hat industry in the United States by her allegiance to this sartorial finery, wearing hats at the presidential inauguration in 1961. Look into Jones’s amazing atelier workroom where creativity spills forth over desks and floor in a profusion of ribbons and trims. The exhibit runs through April 15, 2012.
Posted by Polly Guerin at 11:35 AM No comments: