Fashion’s latest variations on black and white can be a challenge to fashionistas. It’s an easy formula—checkerboard squares, cross stitch graphics and a myriad of stripe variations are the ‘it’ look for spring. 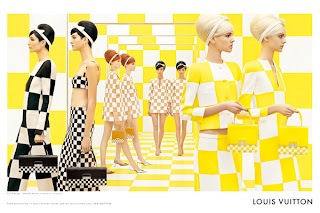 BLACK and WHITE PERPLEXED Not everyone can appreciate the black and white fashion theme—how do we make a white blouse and black pants look new and fresh? The old standby, a stylish white blouse with black pants doesn’t seem all that exciting until you choose a really special designer blouse and spice up the outfit with black and white accessories or graphic shoes. However, too much black and white can make one feel drab. It should not be worn as a uniform but alternated with other color wardrobe choices or checkerboard patterns in yellow or orange.

CHECK IT OUT Not everyone can wear checkerboard squares. Choosing the right black and white checkerboard pattern depends on how you can carry off the look. Large squares may work for one woman but a petite woman would find the pattern overbearing and might opt for smaller squares. Marc Jacobs’ spring collection of black and white checkerboard squares were inspired by the columns of different heights in Paris’ Palais Royal, known as Les Deux Plateau. Get ready, window displays of the black and white theme for select Vuitton boutiques are timed for arrival of the ready-to-wear collection in March.

KEEP IT SIMPLE The black and white trend doesn’t require a lot of jewelry. A delicate gold necklace on a white blouse can add a bit of flair, but chunky pieces just don’t work with the trend. Loud black and white prints take a bit of bravado to carry them off. For novice fashionistas the look can be achieved with just one wardrobe piece, like a checkerboard printed skirt or a black and white animal print top. A word of caution---a head-to-toe black and white wardrobe can be overbearing and few women can carry the look off to satisfaction.

COLOR SYMBOLISM Just how and where the black and white trend emerged is questionable. However, the timing seems just right for the economic climate today. There is powerful symbolism in the look. White evokes simplicity and purity while black symbolizes power and elegance. The effect is never boring. Black and white stimulates and challenges our brain to wake up and move forward.

BLACK AND WHITE CAN ADD SPICE AND ACTION FOR WARDROBES THAT SPAN FROM DAY INTO EVENING WEAR. IT’S A CLEAN AND PRISTINE WAY OF DRESSING WITH MINIMALIST APPEAL.

Posted by Polly Guerin at 9:07 AM No comments: 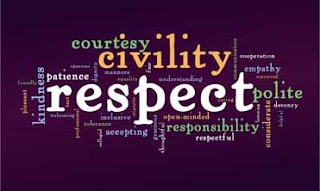 Whatever happened to proper English coupled with politeness and tender conversation? People today seem to have cultivated an abbreviated version of English that is both perplexing and disappointing. I remember my voice teacher, Madame Danova, when she wanted to excuse herself she would say, “Pardonez moi,” or “Excuse me.” Today, instead of “Thank You,” I hear “No Problem.” Just what does that mean? I did not have a problem in the first place so a polite “Thank You” would be appreciated.

A NEW LANGUAGE Greetings in the new jargon need explanation. I was shocked not so long ago, when a college colleague at a university where I taught would greet me with “Yo,” instead of “Hello,” I guess she thought she was being ‘cool,’ or the students had infiltrated her vocabulary to the point that on one occasion she tried to get my attention by saying “Hey!” I did not respond because “Hey,” seemed like a foreign language and I could not fathom how a colleague could speak in such jargon. Instead she could have engaged my interest by saying, “Beg your pardon.” Perhaps I am asking too much from society. It seems to me that even the slightest event is “Awesome,” even if someone is referring to a deli lunch.

“UMM” IS NOT A WORD Judge Judy has it right all the time on her TV show. When an individual responds with “umm” she cuts right into their “umm” and adamantly says, “Umm is not a word!” and they quickly change to “Yes.” She even takes time to berate them about their appearance in court. “Where did you think you were going today? That is not the proper way to dress to come to court.” I wish those words reach some individuals who think nothing about appearing in public places improperly dressed or rather in a state of undress. Isn’t it time to return to civility in every walk of life?

DINING IN STYLE Even corporations are concerned about how their junior executives appear in public with their clients and some go so far as to hire etiquette experts to teach their employees how to dine using the proper utensils and proper conversation, no putting elbows on the table, No iPads, iPods, cells or beepers to interrupt the business luncheon. Weren’t proper table manners something you were supposed to learn at home? Will the loud voices in restaurants ever simmer down? It seems to me that most of the most offensive people who have been plugged into various electronics devices must be somewhat deaf so by necessity they talk so loud that if you are in the immediate adjacency you can hardly hold a conversation with your table guest.

NO SUBJECT IS TABOO Every topic imaginable is out there discussed on television. From the most intimate physical disorders to sexual functions and a myriad of diseases…it’s a wonder anyone feels healthy. Then the list of adverse side effects you could contract, that the ‘so and so medicine’ may have, is enough to make you vomit. When someone affronts you at a party and opens the conversation with some vulgarity, it’s supposed to be funny. You can’t blame the inebriated guy who got into trouble because he grabbed a woman’s boob that was hanging out of her dress. “She asked for it,” he said in defense.

CELEBRITY INFLUENCE. Celebrities cannot be trusted to give the proper message either. What with necklines down to their waist and slits up to their crotch no wonder women who can easily be influenced think that’s the way to dress. It baffles me why nudity is so prevalent. I wonder why they bother to wear the dress at all, but leave it to the paparazzi to expose their brevity as the hottest new thing. There is no better time than now when people need role models that show off their civility with style and good manners.

I AM NOT SUGGESTING THAT WE GO BACK TO STRICT FORMALITIES, BUT LIKE MANY OTHER PEOPLE I JUST WOULD LIKE TO SEE A RETURN TO MANNERS, POLITENESS AND CONSIDERATION. IN SOME POCKETS OF SOCIETY IT DOES EXIST BUT THE MAIN STREAM POPULATION IS OVERLOADED WITH A LANGUAGE Of QUESTIONABLE INTERPRETATION.

Posted by Polly Guerin at 8:08 AM No comments:

There’s nothing dowdy about the Downton, Abbey!!! Just when World War I was recent history, English aristocrats, Mary, Sybil and Edith adapt 1920s style with the fashions they wear to embrace a new era. The costume look---the dress plus jacket or coat with matching trim goes back to Victorian times but it’s a refreshed version that only the Crawley women could carry off, particularly Mary who wears a going away ensemble that is serious yet quite chic. The good news; the Downton Abbey look is easily adaptable for today’s fashionista and the stores have responded to it with garments that have that special refined look and the dignity of performance for work or social occasions. Simplicity is the rule in Downton Abbey style and young women might take inspiration from it.
FASHIONISTA’S STYLE The 1920s look is not all about flamboyant flapper dresses, though there are many on the retail racks, it’s all about choosing accessories as well—like a clock hat which is a close fitting hat that allows peeks of curly hair to peek out at the sides. Other modest brim styles reflect the modest taste of the 20s look. Sheer lace tops add flair to dignify a black skirt for evening wear while a vintage clutch will carry through to any special occasion. Streamlined, sleeveless sheath dresses simplify daywear and bulky jewelry is replaced by demure jewelry or a simple strand of pearls. The Art Deco influence also comes up strong as an accessory theme, especially drop earrings in architectural motifs.
THE REAL-LIFE DOWNTON Just where is Downton Abbey? Good question. It’s actually, Highclere, the grand, 175-year old family home in West Berkshire, England, where the adult soap opera is filmed. Today, it is one of the most popular tourist attractions and thanks to the TV drama it has become the popular location for real-life weddings, pricey I might add. It is also the home of Lady Fiona Carnarvon and her husband the Earl of Carnarvon, and legend has it that the family has lived there since 1679. Interesting to note, the home is exactly as it is on television and even the great drawing room where the Dowager Countess (Maggie Smith) holds court.

HERE’S TO THE RETURN TO ELEGANCE!!! TO THE MANOR BORN CAN BE WORN BY FASHIONISAS WHO DESIRE TO EMULATE DOWNTON ABBEY STYLE.  WITH THE RETURN OF REFINED TASTE, FROM HEAD TO TOE, THE COLORS ARE GENTLE BEIGE AND DELICATE PASTELS BY DAY AND BY NIGHT RICH MAROON MONACO BLUE, A DEEP MIGNIGHT NAVY SHADE, UPDATES THE SOCIAL WARDROBE.

Posted by Polly Guerin at 10:37 AM No comments: