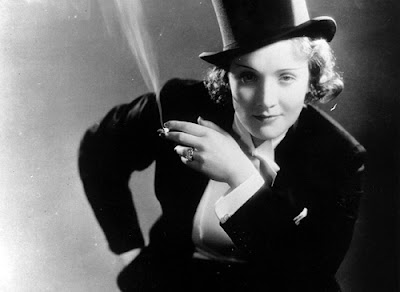 Ever wonder what to wear come the holiday season? In short order, borrow from the men! No, I am not suggesting that you go out and purchase a formal tuxedo, but rather to adapt its timeless appeal in modified versions. The tuxedo, casually referred to as a “tux,” is a timeless classic that translates easily into women’s wear and it’s a spiffy way to look sophisticated and chic. Fashion designers have interpreted the tuxedo in a variety of ways that makes the style ready for any black tie event. Even show Biz personalities, like Josephine Baker and Marlene Dietrich (pictured above)adopted the “tux” to give that androgynous style to their stardom. The idea wearing black and dressing up for evening events is truly an American inspiration.
STYLISH TUXEDO LOOK
A fashionable, nipped in the waist tuxedo jacket with satin lapels, is like a short black blazer. Worn with a red glitter bustier underneath and skin curving velvet tights it cuts a dashing figure at a cocktail party. When the occasion is even more casual, wear the jacket over denim pants. The bolero style, like a waiter’s short tux jacket has youthful flair when worn with Capri pants. This short tux also pairs well, as does the classic tux jacket, with a white satin blouse and a long; side slit velvet or satin skirt for theatre or opera events. Either jacket worn with black, chiffon palazzo pants is hostess staple.
A PRINCE OF A TUX
In early 1800s most gentlemen at that time dressed in a traditional white tie and tails, and it wasn’t until the later period that the “black dinner jacket” became fashionable. In the summer of 1886 James Brown Potter, a Tuxedo Club member, went to England on vacation with his wife Cora and met the Prince of Wales, the future King Edward VII, at a court ball in London. The Prince invited them both to visit him at Sandringham, his sprawling 11,000-acre estate in Norfolk. James Brown Potter had no idea how to dress for dinner. So asked the Prince of Wales for his advice who put him in touch with his own Savile Row tailor in London, Henry Poole & Co. where he was fitted with a short black blazer, which was quite an innovation from the formal “tails” of the time.Potter liked the new look so much that he brought the it back to Tuxedo Park. If truth be told this is the beginning of the Tuxedo but there are other versions to tell.
BIRTH OF THE AMERICAN TUXEDO
At an Autumn Ball, October 1886, in the tony enclave of Tuxedo Park, New York, the guests at the Tuxedo Club were confronted by an unexpected shock. At that time, men’s formal dress consisted of the traditional tails. However, Tuxedo Park’s high society bon vivants changed men’s formal wear with riveting results. Legend has it that Griswold Lorillard, the son of Pierre Lorillard, the founder of Tuxedo Park, N.Y. and some of his spunky friends cut off the tails of their jackets, which by the way may perhaps have been inspired by Poole's new look. The short jacket created a sensation at the ball since they were "out of uniform." without the customary tails. The event and bravado of the young men garnered unrivaled fashion publicity in the papers. The story of the Tuxedo spread like wildfire across the country and a new abbreviated men's formal fashion, the short black dinner jacket, was born.
The new style eventually became known as the "Tuxedo,” obviously named after Tuxedo Park.


Visit Polly Guerin at www.pollytalk.com and click on the Blog of your interest in the right-hand column.