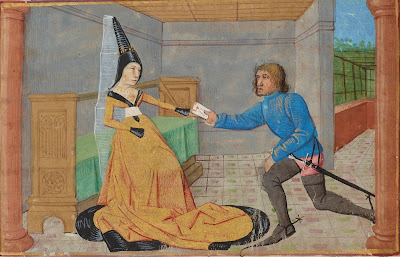 “Illuminating Fashion,” the fascinating history of fashion and its ties to politics, social upheaval and cultural influence during the Middle Ages is a rich study in which clothing styles provide clues to how the royals and gentry expressed their fashion preferences and reacted to the vicissitudes of the world around them. The nearly 200 years covered by the show provides the viewer seeking fashion accuracy a rare opportunity to see a rich era for fashion, a period in which clothing styles changed rapidly, often from one decade to the next. The exhibition at the Morgan Museum and Library, “Dress in the Art of Medieval France and the Netherlands,” explores the evolution of courtly clothing from the “Fashion revolution” around 1330 to the flowering of the Renaissance in France following the accession of King Francois I in 1515 in shaping fashion.
ILLUMINATING FASHION Because few actual garments from the Middle Ages survive, the Morgan focuses on the art in the illuminated manuscripts and early printed books to reveal how historical dress in Northern Europe provides clues to the wearer’s identity and character. The exhibition connects through a historical timeline the potential impact of political unrest and social upheaval on the history of fashion during one of the world’s more calamitous eras: The Hundred year’s War, the occupation of Paris by the English, and the arrival of the Italian Renaissance in northern Europe. The exhibit also demonstrates the richness of symbolism in medieval art and how artists used clothing and costume as a code to help viewers interpret an image. In these works of art, what people wear is a clue to their identities and moral characters.
FASHION OPULENCE Viewers seeking fashion accuracy need only examine the magnificent illuminated books to see the colorful, gold leaf illuminated fashions which provide a rare glimpse into the era of fashion opulence. I might suggest that you bring along a magnifying glass to look closely at the amazing detail and preserved colors in some of the tiny books. Replicas of some of the fashionable images from the manuscripts have been reproduced in colorful large-scale portraits on the walls which form an impressive panorama above the glass cases where the timeline connects historical facts. HISTORICAL REPRODUCTIONS To enhance appreciation for the fashions of the era, on display four full-scale reproductions of late medieval ensembles depict actual garments in the illuminated manuscripts. Using period hand-sewing techniques and authentic materials including silk, velvet, gold brocade, linen, straw and ermine the recreations include the Catherine of Cleves, Duchess of Guelders richly attired, her voluminous ermine-lined Houpeland, with cascading bombard sleeves, her hair is enmeshed in reticulated cone-shaped headgear.
When I mentioned that I would have expected to see such an impressive historical fashion interpretation at a fashion museum, Curator of Medieval and Renaissance Manuscripts, Roger S. Wieck replied, “Yes, but we have the manuscripts,” and that is what this exhibit is all about “Illuminating Fashion” that touches on the potential impact of political unrest and social upheaval on the history of fashion during one of the world’s more calamitous eras. At The Morgan Library & Museum, 225 Madison Ave., New York, through September 4, 2011. www.themorgan.org.
Posted by Polly Guerin at 8:31 AM 1 comment: