The Hankie, A Fashionable Coquette (c) 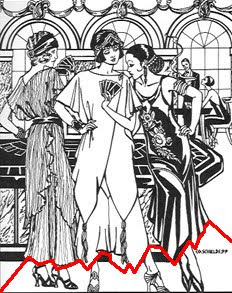 Fragile and delicate, imbued with feminine coquetry the handkerchief, a mere square of linen, commanded a major role in designating royal favor or marking the bonds of love and even marriage. Early in the sixteenth century we begin to recognize handkerchiefs under that name, but they were confined to the nobility and upper classes. Who else could afford the extremely rich silks trimmed with luxurious Venice gold lace which Henry VII carried to demonstrate his noblesse oblige. An early fashion trendsetter the King elevated the handkerchief to royal status and it has remained a fashion accessory ever since.
SQUAREING OFF ON SHAPE
It is rumored in fashion history that Marie Antoinette (1755-1793) had to trouble her pretty head about handkerchiefs which were offered in so many shapes that she had to put a stop to it. Her husband, King Louis XVI (1754-1793), made it a law and all handkerchiefs remained square. A fine lady or gentleman gave to their favorites, as a token of their love, little three to four inch square handkerchiefs. By the seventeenth century lace covered the fashion silhouette at the throat and wrists, and even the tops of boots. Handkerchiefs did not escape this extravagance and were edged with deep flounces of lace and were extremely costly.
DROPPING A HINT
As a communicator of love’s intrigue the handkerchief of finely crafted linen and lace was given, accepted, worn or even purposefully dropped to catch a lover’s attention. Many a lover could communicate their intention by the mere drop in the right place. However, there is the case of poor Anne Boleyn and her indiscriminate dropping of a handkerchief at the feet of a favorite courtier after a joust, and you know what happened, her demise was foretold. Then there’s negative side of handkerchief lore. In Shakespeare’s Othello, Iago manipulates a handkerchief to ignite Othello’s jealous rage. On the Orient Express a handkerchief with an embroidered initial, left at the scene of a crime, plays an important part in the investigation of a murder.
HANKY PANKY MEN’S FASHION
Men got into the handkerchief craze with noticeable flourish. The almost universal use of snuff in the eighteenth century offered many opportunities for the display of a fine handkerchief and their demonstrated use was a sign of good breeding. The First World War saw a curious revival of the handkerchief as a decorative accessory for men. As the breast pocket on men’s suits were now made on the outside it became fashionable to show a protruding handkerchief, which was sometimes colored to match the tie. In the nineteenth century the handkerchief spread to all classes.
HANDKERCHIEF CURIOSITIES
Children’s hankies were embroidered with the days of the week and during the 1920s and 1930s, several handkerchief books were produced depicting artist, Gladys Peto’s artwork. These charming publications contained six square children’s handkerchiefs made from Irish Linen, and covered subjects such as school time, nursery rhymes and Alice in Wonderland. Women found ingenious ways to use the handkerchief creatively and sewed several handkerchiefs together to make a fancy apron. The handkerchief hem on a skirt takes its cue from the handkerchief as does ordering a handkerchief table, a corner table in a restaurant where lovers can have some privacy.
DEMISE OF THE HANDKERCHIEF
Though people no longer dangle a handkerchief to catch a lover’s eye, women of good taste do carry a handkerchief in their purse or tuck it like a flower in the breast pocket of their suit. However, for most people today the Golden Years of the handkerchief have vanished giving way to the economy and hygiene of disposable soft paper handkerchiefs to use not only for colds but also for drying wet eyes during a soppy movie. But I’m old-fashioned and still carry a handkerchief as my feminine right to having something beautiful in my purse and on occasion to flourish before an admiring public.
Visit Polly at www.pollytalk.com.
Posted by Polly Guerin at 9:03 AM No comments: