Ode To The " LITTLE BLACK DRESS" 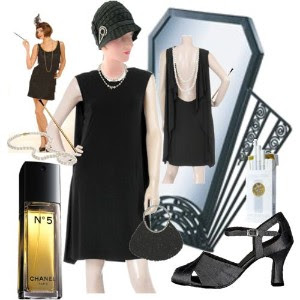 Since Coco Chanel introduced the “Little Black Dress” in 1926, it has become the epitome of chic and the one classic that every woman covets for her wardrobe. Intended by Chanel to be a long-lasting, versatile, affordable and accessible to the widest market possible the “Little Black Dress, which many refer to by the abbreviation LBD, has outlasted fashion frivolity as the essential wardrobe basic. Be it for daytime wear or cocktail occasions the simple but elegant black dress can be dressed up or down depending on the occasion: for example, worn with a jacket and Chanel pumps for daytime business attire, the LBD can reappear for evening without the jacket and accessorized with jewelry and stilettos, perhaps adding a little Minaudiere purse. Vogue called it “Chanel’s Ford,” and like the Model T, the little black dress would become “a sort of uniform for all women of taste.”
Birth of the Little Black Dress As early as 1915, Coco Chanel envisioned the LBD as the new uniform for women for afternoon and evening wear. However, one may also surmise that Chanel’s early life educated by the nuns in a convent orphanage may well have influenced her affinity for the black uniform (the nun’s habit influence). She rejected the accusation that she was trying to impose the style of the working girl on haute couture by creating the “deluxe poor look.” Chanel’s silhouette, staying close to the uncorseted figure, began to make the skirts of Lanvin’s hobbled-skirt look old-fashioned and Poiret’s Orientalism too theatrical. Sadly, Poiret spent his final years in decline and debt. Chanel and Poiret had a chance encounter on a Paris street in 1928. Noticing that Chanel was wearing all black, Poiret inquired, “For whom, Madame, do you mourn?” To which Chanel replied, “For you, Monsieur.”
Black, The Essential Color of Fashion Black as we know has traditionally been associated with mourning but it has also had a sinister relationship with magic, wizardry, Halloween and a dark, moody scenarios. However, painting played a major role in the rediscovery of black as an essential color of fashion. In the 1881 the American painter, John Singer Sargent met Madame Gautreau in Paris society. She agreed to sit for a portrait, which he titled “Madame X.” To his shock and consternation, the painting became an instant scandal, viewed as salacious because of the sexual suggestiveness of her pose and revealing nature of the black gown. Likewise theLBD also partakes of a chameleon character changing as it does from day to night depending how it is accessorized and who wears it.
Black, The Color of Stability While Coco Chanel’s “Little Black Dress,” became the archetype of black as the color of high fashion, we must give black much of the credit for the timeless quality of the LBD. Black has a certain dignity about it. It can be called aristocratic, sophisticated or chic. Its economy and elegance has brought it forward into the Twentieth Century unscathed and always a reliable staple to pull us through any occasion. Many women aspire to own a simple, sleeveless black sheath similar to the one designed by Hubert de Givenchy and worn by Audrey Hepburn as Holly Golightly in the film Breakfast at Tiffany’s, but sadly vintage styles like this are difficult to find and when you do it is at an auction house. The LBD Audrey wore in the film was sold at auction for over $800,000. Other celebs include the “little black sparrow,” Edith Piaf, the French folk icon, who performed in a black sheath dress throughout her career.
Alas when all else fails and we have a wardrobe dilemma, the Little Black Dress can always pull us through most any occasion.
Bio: Polly Guerin is still searching for the ideal Little Black Dress. As a fashion historian and former professor at the Fashion Institute of Technology she produced the video “The Story of Color,” delving into the psychology of color, its influence on fashion, home furnishings, products and advertising. Her book, “The Message is in the Rainbow,” is being peddled around to publishers by an agent.
Posted by Polly Guerin at 1:01 PM

Labels: a Forever Fashion, The LBD, The Little Black Dress