THE MYSTIQUE OF THE HERMES SCARF 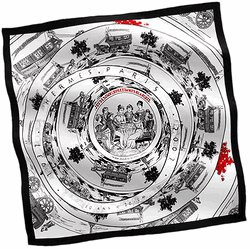 Bio: Polly Guerin indulged and purchased a Hermes silk scarf in Paris and still wears it decades later. As a fashion historian and former professor at the Fashion Institute of Technology she taught “Product Knowledge,” and accessories were a major topic. Early on she was an accessories editor at trade newspaper, the bible of the fashion industry, Women’s Wear Daily.
Posted by Polly Guerin at 8:05 AM