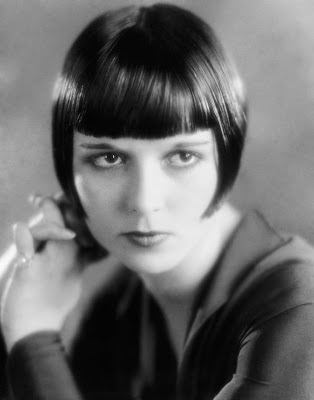 The dictionary explains Pixie as a small pert, mischievous person who is playful, impish and whimsical. So what does that have to do with the current comeback of the boyish cuts, the pixie style and other incarnations of lacquered spiked hairdos? Well, Pixie style is not for the faint of heart. It takes a gutsy gal, preferably one with a cute, youthful face to pull the Pixie hairstyle off with pizzazz. Otherwise short no-nonsense unkempt hair just looks downright dowdy. Well, in a nutshell maybe those starlets like Hally Berry and Mia Farrow can get away with the Pixie look but as Noel Coward decreed, “Please Mrs. Worthington, don’t put your daughter on the stage.”
ART DECO CAPS IT ALL The chic cap-like hairdo with short bangs and its side curlicues was all the rage with the flappers of the 1920s and in a sense as hemlines got shorter so did women’s hair. Short mannish bobs may have had their incarnation as a reaction to the loss of thousands of men who had been sacrificed in WWI and the over population of women. It was an era of the gamine, the boyish look. Tamara de Lempika the famous painter of the era depicted her streamlined beauties flaunting their new independence with short sleek hair. On the silver screen Louise Brooks, pictured here, personified the capsulated look that even the most conservative woman could easily adapt. Mary Martin with her impish looks could certainly convince us that Pixie hair was the style of the moment.
ACCENTING THE POSITIVE The best advantage of a Pixie cut is its wispy nonchalant attitude. It can create an elegant swept up look that enhances one’s cheekbones and gives ample room to accent the eyes with a smoldering or innocent look. Audrey Hepburn’s Pixie cut was indeed the personification of the ingénue look as she gazed out at us from Breakfast at Tiffany. For one thing her marvelous bone structure took center stage and if you’re lucky enough to have such an advantage then go ahead and chop away but please remember to look in the mirror and ask yourself, “Is this right for me?” Maybe you should try a wig on first to see if it’s ‘You.’
SOPHISTICATED CUTS Don’t think that all you need do is to step into the nearest barber shop and demand a Pixie. It takes a talented hairstylist to generate the delicate layering, the wispy tendrils that caress your face and taunt viewers with your whimsical prankish hairdo. And it really isn’t maintenance-free because the Pixie, boyish cut needs to be regularly maintained to perfection, or else it just sags and drags you down. Twiggy said it all when she made the scene and transformed herself into a fashion icon but my all time favorite pixie sprite is Kate Moss whose gorgeous face simple overpowers the pixie cut.
Enough said. One thing to remember is that the Pixie is charming on the right face and on the right age of a woman who is young at heart, is perky and has a pixie sense of humor.
Posted by Polly Guerin at 7:56 PM