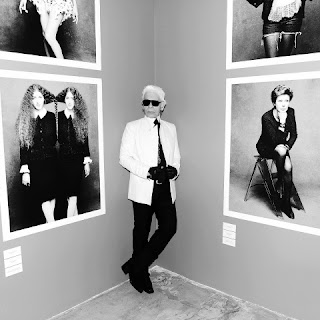 You’ve heard of Chanel’s famous ‘little black dress,” now get ready for the ‘little black jacket.’ It’s as basic as you get but this is no ordinary jacket. By Chanel’s standard it’s short, chic and versatile. All the fanfare about the little black jacket came about with publisher Steidl’s forthcoming coffee table book, “The Little Black Jacket: Chanel’s Classic Revisited,” by couture designer, Karl Lagerfeld and stylist extraordinaire, Carine Roitfeld. The book was showcased at a pop-up event which exhibited the book’s 113 portraits of notables displaying the jacket’s versatility. So what’s in it to you? Think ‘little black jacket’ the next time you shop for a ‘must have’ wardrobe accessory.
LAGERFELD MOBBED Lagerfeld was mobbed at every turn as he greeted the celebrities and fashionistas. Mr. Lagerfeld, the head designer at Chanel, made his way through the gallery, like a visiting potentate greeting the crowd with sophisticated charm. Such a supreme individual garners accolades and was followed by photographers, videographers and party guests all eager to be photographed with him. Alber Elbaz got so carried away she pulled out her iPhone to take a snap of her own portrait on the wall. Carine Roitfeld was wearing an interpretation of the jacket she had actually constructed from a skirt. “You know Karl, you have to surprise him,” she said of her approach to styling the portraits. Theophilus London who was coaxed into the tweed Chanel creation for the book wore it again to perform at a post-opening dinner at Balthazar.
BEAUTIFUL PEOPLE The book features a mix of beautiful people shot in black-and-white wearing a black, tweed Chanel jacket in surprisingly varied effects. An enormous photo of Vogue editor, Anna Wintour’s tweed-jacket-clad back greeted guests as they entered the gallery. Ms. Roitfeld, the former editor of French Vogue, who is now the fashion world’s darling, was also trailed by a video crew shooting a documentary about her fabulous life. You can’t imagine Karl Lagerfeld with children but it appears he has a soft heart for the little ones. Hudson Kroenig, the four year old son of male model and Lagerfeld’s favorite Brad Kroenig exchanged a high-five with Mr. Lagerfeld.

Like Cinderella, Mr. Lagerfeld did not linger long and exited the building, leaving the Black Jacket crowd holding champagne flutes and admiring each other.