IVY LEAGUE, NEVER OUT OF STYLE (c) By Polly Guerin 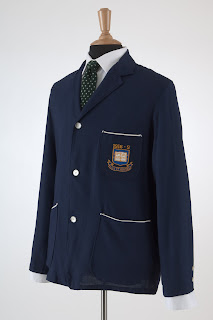 “Ah,” said the young lady, “You must be an Ivy League man? I can tell by your attire that you either hail from Yale, Harvard, or Dartmouth.” No wonder she was captivated by his wardrobe, because dating an Ivy League man was quite a feather in a young college girl’s ambition. Why? Well, Ivy League identified with a certain class of individual who attended any one of a group of Ivy League universities having a reputation for scholastic achievement and social prestige. Ivy League was considered an elitist style that identified with class, bearing and distinction but its classic good looks made it an all-American favorite. The Museum at FIT pays homage to Ivy League with the exhibition “Ivy Style,” one of the most enduring clothing styles of the 20th century on view through January 5, 2013.
ONCE UPON A TIME While Ivy League or Ivy Style was once the cutting-edge look worn exclusively by young men of means the look has come main stream and has permeated both men’s and women’s fashion collections, and leading designers, such as Tommy Hilfiger and Ralph Lauren, Michael Bastian and Thom Browne call it their own, while other designers pepper their collections with the look. Ivy style spread way beyond the hallowed halls of the elite universities to influence the evolution of men’s classic clothing and has rooted itself info the fashion vocabulary on an international scale.
ORIGINS OF IVY STYLE During the interwar years from 1919 to the onset of World War II, classic items, such as tweed jackets and polo coats, were appropriated from the Englishman’s wardrobe, modified and redesigned by pioneering firms such as Brooks Brothers and J. Press for young men on the campuses of elite East Coast colleges. Ivy Style included Shetland tweeds, gray flannels, Oxford button-downs, repp ties, and casual seersucker and madras. From approximately 1945 and the late 1960s Ivy Style spread across the United States and khaki pants and penny loafers were being worn by a whole new, diverse population that included working-class GIs as well as leading jazz musicians.
THE EXHIBITION ENSEMBLES The Ivy Style exhibit is arranged thematically in an environment that evokes an Ivy League university campus. The side venues feature typical university settings, such as a classroom, dormitory room, and fraternity house with clothing and accessories appropriate to their use. Another key setting is a ‘university shop,’ the kind of retail establishment that existed in nearly every city in the United States in the mid-20th century. Again, environments feature period objects that enhance the story being told by the garments
WAXING NOSTALGIC I REMEMBER IVY LEAGUE STYLE, BUT I AM NOT A PURIST. WHETHER TWEAKED OR DISTILLED THE FUNDAMENTAL ROOTS OF IVY STYLE ARE FOREVER LINKED TO THE CLASSIC AMERICAN LOOK.

The Museum at FIT, is part of the Fashion Institute of Technology (FIT) and is located at 27th Street and Seventh Avenue. Museum hours are Tuesday-Friday-noon-8pm, Saturday-10am-5pm. Visit fitnyc.edu/museum.