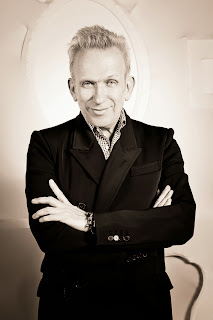 THE FASHION WORLD of JEAN PAUL GAULTIER FROM the SIDEWALK to the CATWALK: This theatrical spectacle, the first international exhibition celebrating the career of the legendary French couturier Jean Paul Gaultier, who has shaped the look of contemporary fashion with his avant-garde designs, makes its only east coast stop on an international tour, organized by the MMFA, Montreal Museum of Fine Arts in collaboration with Maison Jean Paul Gaultier, Paris. Where? At the Brooklyn Museum on view through February 23, 2014. “I am proud and honored that this exhibition is presented here, where the true spirit of New York lives on. I was always fascinated by New York, its energy, the skyscrapers of Manhattan, that special view of the sky between the tall buildings,” said Gautier of the Brooklyn presentation where some mannequins seemingly come alive, their eyes blink, the lips move and the words uttered grip the viewer with uncanny realism.

THE COLLECTION This breath-taking overview of Gaultier’s extensive oeuvre includes exclusive material not exhibited in previous venues of the tour, such as pieces from his recent haute couture and ready-to-wear collections and stage costumes worn by Beyonce. The 150-piece lineup, curated by Thierry-Maxime Loriot, MMFA, includes some of Gaultier’s most iconic pieces, like Madonna’s original cone-bra bustiers and bare-breast suspenders, and looks from his collection inspired by Hasidic Jews in Brooklyn. There are several piece that have never been exhibited before, including a glittery jumpsuit worn by Beyonce. 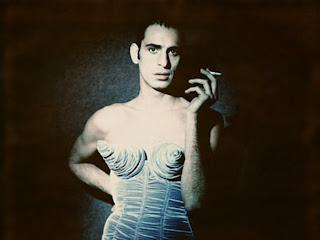 AVANT GARDE DESIGNS Distinctively different from traditional couture, Gaultier’savant-garde designs demonstrate a deep understand of the issues And preoccupations of today’s multicultural society. For inspiration he has turned to a variety of cultures and countercultures. The show is organized into seven thematic sections: The Odyssey, The Boudoir, Muses, Punk Cancan, Skin Deep, Metropolis, and Urban Jungle. Accompanying the designs are sketches, excerpts from films, concerts, and dance performances, and photographs by Richard Avedon, Any Warhol, Cindy Sherman, and others---all testifying to the daring genius of Jean Paul Gaultier.

AMAZING LIFE-LIKE MANNEQUINS You will need to take a second look as the fascinating mannequins seemingly talk the talk and flirt with you. Many of the mannequins used to display Gaultier’s designs revolve to reveal all angles of an ensemble. Some circulate on a continuously moving catwalk and many wear remarkable wigs and headdresses created by renowned hairstylist Odile Gilbert and her Atelier 68 team. Throughout the galleries, thirty-two of the mannequins come alive with interactive faces created by technologically ingenious high-definition audiovisual projections. A dozen celebrities, including Gaultier himself, model Eve Salvail, and bass player Melissa Auf de Maur, have lent their faces and their voices to this project. The production and staging of this dynamic audio-visual element is the work of Denis Marleau and Stephanie Jasmin of UBU/Compagnie de creation of Montreal. Jolicoeur International of Quebec realized all the custom-made mannequins with different skin tones and positions.

ORIGINS OF DESIGN As for inspiration Gaultier admits, “If I do fashion, it’s because of “Falbalas,” a movie from the 1940s, before I was born. It was about a couturier at a Paris couture house, inspired by a woman to give him the idea for a collection. He made a beautiful collection because he was in love with her. It was so explicit, so perfect in the description of the workings that when I started to work at Cardin and Jean Patou, I thought, ‘Oh, but I am in Falbalas.”’ One of the most adorable items in the show is Nana, Gaultier’s childhood teddy bear that, at age six, he customized with a cone-like bra made from newspaper pinned onto the stuffed animal. "It was before Madonna,” he said.

For his part, Gaultier hopes visitors will “not be bored but surprised and amused, and have a good time and fun.”


Polly Guerin is author of the book THE COOPER-HEWITT DYNASTY OF NEW YORK (History Press 2012).