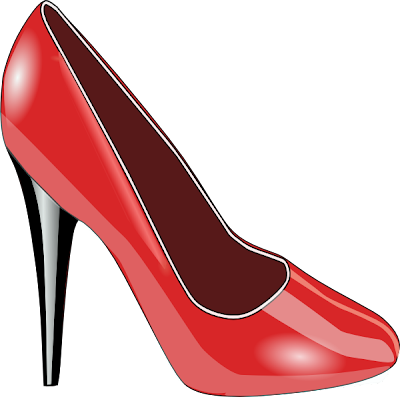 FASHIONABLE FOOTWEAR, AN INDISPENSABLE ACCESSORY ©
By Polly Guerin, The Fashion Historian
Nowadays on the fashionable streets of major cities the thin, gravity-defying Stiletto Heel seems to have ensnared more fashion victims than any other footwear style. Yes, they are sexy but difficult to walk in and most importantly they throw the body off balance, and can cause other foot problems. Yet despite this fact countless women insist on spending big bucks to point their way to fashion.
FOOTWEAR'S FASHION VICTIMS
History seems to repeat itself and so it is in fashion footwear. You no doubt remember how women in ancient China insisted on binding their feet to emulate the royal prerogative, but this rendered them incapable of walking . It’s alright, I guess, if you’re a royal and can be transported about by servants, but obviously this privilege was not available to an average peasant woman. As for platform footwear Carmen Miranda may have popularized this style but clog versions also go back to ancient China as well as adaptations of platform shoes as early as 1640. Throughout the ages people have been dying to follow whims of fashion and the footwear became an indispensable accessory.
A HISTORICAL LEAP INTO FOOTWEAR
Until man invented footwear, he walked. That’s it barefoot! The invention of footwear was the first step forward in devising protection for the feet. The sandal is perhaps the oldest creation and has its incarnation as far back as the Egyptians and evolved in modern times as the flipflop. Jeweled sandals worn by the privileged few in the early Roman Empire were decorated with priceless gemstones and pearls. However, one could not exist by the sandal alone and eventually different styles were needed as transportation. Footwear back then identified with one’s lifestyle or work and did not come in a right and left configuration. They were just one size fits all. If you were a member of the wealthy class or a member of the court, however, you could have your servant wear the shoes for a while so that they could break them in for you. And did you know that in the 15th century women of fashion privilege and dandies outdid the pointed vamp on their boots. The point became such a projectile that a gold cord had to be extended from the point to the top of their boot so that they could walk.
DECORATIVE DESIGNS
The French took the shoe and boot into further decoration with lace trimmed cuffs in the 17th century and the Cuban heel painted red was a style reserved for the king. The wealthy classes in Europe wore shoes in which the uppers were made in the rich brocades of the Orient, and from the looms of Venice and Genoa. Defying the mud and filth in the medieval cities it was essential to wear shoes with stilt-like pattens of wood to elevate the foot and increase the wearer’s height or aid them in walking through the filthy streets. These practical stilt-like platforms were popular footwear and worn right down to Colonial America. During the Empire period in France women opted to imitate the Greek and Roman fashions and wore such diaphanous garments that only a delicate slipper could accommodate such attire. Costly to make and fragile these slippers did not last more than one night on the dance floor. Sadly, too, fashion victims who wore these sheer gowns in frigid weather didn’t survived either.
THE CULT OF HANDCRAFTED SHOES
Footwear was one of the great industrial arts in the Middle Ages and bore a distinction of service with pride and production of a specific nature. Leather tanners, boot, shoemakers and cobblers were organized into guilds and each guild had it own armorial insignia attesting to the quality of their trade. Interesting, is it not, that the same tools used in the production of handmade shoes today are the same type of tools used in Europe in the l8th century? Handcrafted leather shoes or custom made shoes are an expensive rarity. Today, however, most shoes today combine machine production with some handmade features. Herman Delman, of Delman Shoe fame, who specialized in building shoes that were chic, yet comfortable believed that skilled construction was essential to the creation of a quality shoe. He employed several notable designers over the years, including Roger Vivier, Herbert Levine, and Kenneth jay Lane as a means shaping the tastes of fashionable women across the country. An extrovert and proficient businessman Delman knew the power of educating the viewing public about handcrafted shoes. At one time Delman store on Madison Avenue featured an oval window showcasing three cobblers at work. “Scandal Sandals and Lady Slippers: A History of Delman Shoes, exploring the company’s vibrant history of style, advertising and fine craftsmanship will be on view at The Museum at The Fashion Institute of Technology, March 9th through April 4th. Free Admission.
Posted by Polly Guerin at 11:18 AM