A WOMAN'S CROWNING GLORY, A HAT TO MATCH (C) 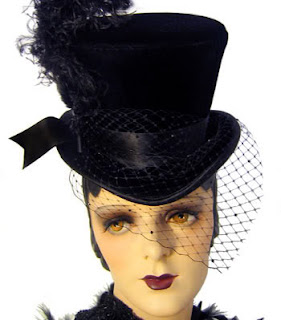 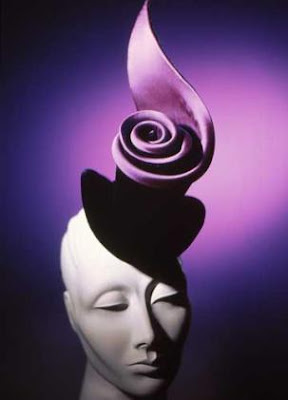 A WOMAN’S CROWNING GLORY, A HAT TO MATCH ©
By Polly Guerin,
The Fashion Historian

Hats have always functioned as more than mere head coverings. The styles created by different civilizations also proclaimed the rank and status of the wearer. It distinguished people by degrees of social class, profession and religious order. Head gear also defined the etiquette of an era, and hats were always an important part of regional and national costume. So what became of a one’s crowning glory?
DEMISE OF MILLINERY
Hats were an important aspect of American and European fashion, until about the 20th century when men and women started going hatless. Today one hardly ever sees women wearing hats. Exceptions being at church services, weddings, race courses and other special events. Construction workers give us hard hats, baseball caps identify with the all-American spirit, and the beret seems to be mainstay worn by women as well as men in the private and military sectors. Millinery has a broad and ancient history.
THE EGYPTIANS
The early Egyptians were proud of their wig headdresses. In the beginning wigs were adorned with a tasteful gold band. In time, however, this ornamentation became more elaborate and symbols of Gods emerged like ram’s horns or the sun disk. However, it took Queen Nefertiti to introduce the wide-topped crown, but other queens preferred to adopt the vulture headdress, a symbol for motherhood. To top it off the Greeks had their own take on hats.
CROWNING GLORY
Cretans’ hats were a lavish affair---jeweled berets and turbans; huge towering fezzes were worn at a jaunty tilt. Tall, candle-shaped crowns plopped onto wide, flat brings. By the sixth century B.C. women had a nice range of hair styles to choose from. Queens and Goddesses got to wear golden coronets or most regal of all a crescent-shaped diadem, the Stephane. To protect their coifs from the weather, Etruscan men and women might affect a tutulus, a curious pointed hat with an upturned brim. Always the fashion followers by the mid-eighth century, many women copy Charlemagne’s mother, Bertha, who wears her long hair parted in the center and held in place with two thick braids and a headband around her forehead.
THE MIDDLE AGES
When we think of the Middle Ages we picture the period as romantic but it is the era of the Crusades with men going out with snoops, hoods and a variety of hear gear. Women of importance and rank, like Eleanor of Aquitaine wear a high headdress, a pointed cone-shaped hat adorned with a view which helps her to achieve the elongated silhouette inspired by Gothic architecture.
PUTTING ON A THINKING CAP
Men have their day in the 13th century. In an era when most people were illiterate, teachers and philosophers wear square-cut caps which are fit tightly against their skulls and people start talking about “putting on their thinking cap.” Women’s pillbox-shaped caps with their attached chin straps do have some charm but Robin Hood hats with pointed visors and high crowns are in fashion. When Isabelle of Bavaria arrives in France to marry Charles VI, she brings with her outlandish millinery and women of her court sport bourrelets—wide, padded rolls, anchored on top of their hair and the towering cone shaped headdress grows to fantastic proportions. In the Renaissance the Mary Queen of Scots, a veil suspended from a rigid frame was de rigueur.
LOUIS XIV RULE
In the 1670s and 1680s, women adopt a variety of hats---beautifully embroidered snoods stretch over hair buns, hoods for protection and best of all, glamorous wide-brimmed picture hats. By 1735 Fashion Dolls, exact replicas of fashionable French Ladies, from their headgear down to their makeup travel to the Colonies and American women of rank and wealth adopt Parisian style. However, the saga of fashion hats takes a turn for simplicity for the new settlers and the wide-brimmed bonnet carries them forward into the new frontier.
THE WORLD OF FASHION
In the world of fashion, women’s hats were hardly functional at all. Like the tiny cocktail hats of the 1930s that perched at angles on a woman’s head, it was pure décor of the most charming of decorative accessories. Much of the credit for wearing impressive hats today can be observed at black community churches where women take pride in wearing their crowning glory as a sign of respect and their regal privilege. Mad hatters done their fantasy hats at the Easter Parade in New York, and hats of picturesque splendor offer a picture opportunity at charity functions and race track openings. However, once upon a time a woman would not have left the house without a hat, which completed the outfit. In folklore the hat represented a queen's crown and declared to the world that a woman was indeed a Lady.
Posted by Polly Guerin at 9:12 AM