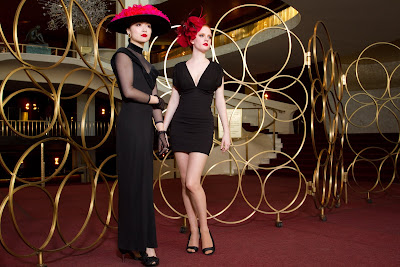 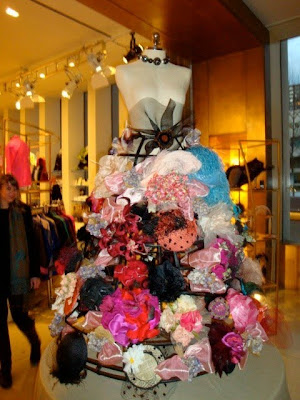 “Glamour” with a capital “G” and polished, lady-like looks are predicted by Fashion 2011 and along comes the revival of the Cocktail Hat. This sophisticated little frippery is making a strong comeback to complement the glamorous, chic new look. There are now many talented craftspeople and millinery designers creating their version of these tempting hats and one of the rising stars is designer Ellen Christine Colon Lugo, Ellen Christine Couture Millinery, who has designed the hottest accessory items of the moment. Although she makes a variety of one-of-a-kind fashionable hats for every head, the feminine, fun and sexy little gems recall the era of the 1930s and 1940s when cocktail hats first emerged on the scene to be worn to cocktail parties and soignée events. Ellen Christine’s precious cocktail hat creations and luxury millinery can be viewed at the Metropolitan Opera Gift Shop and by appointment at admin.ellenchristine.com.
SOME HISTORICAL FACTS
Little cocktail hats with peak-a-boo veils and flowery/feathery fascinator headpieces, worn at the side of the head, have been around since the 1800s. This bit of fluff has come in and out of fashion, but they have finally caught on and even modern fashionistas are perching these chic little nesting hats on their heads to be worn with almost everything. An alternative to wide brimmed hats, these delightful concoctions are the perfect finishing touch for cocktail frocks, prom dresses, evening and wedding gowns or afternoon tea.
COCKTAILS FOR TWO
Cocktail hats and cocktail dresses are fashionable partners. Celebrated French fashion designer, Christian Dior was the first to name the fashionable frock “a cocktail dress in the late 1940s. Traditional cocktail dresses were inspired by the little black dress, introduced by Coco Chanel circa 1926, when the black color was acknowledged as the most appropriate and elegant solution for cocktail attire. This fashionable duo grew into the cocktail culture of the 1950’s when the cocktail hat and the sleeveless cocktail dress were designed to satisfy most discerning constant visitors to the cocktail party.
THE FASHION ESSENTIALS
Dressing for cocktails or a special occasion was a fine art of feminine prerogative. Traditional cocktail dresses were worn with lots of accessories, particularly those little flirty hats, small black purses or gem-studded minaudieres to hold cosmetics and a bit of cash, shoes to match the color of the dress, elbow-long gloves that accented the elegance of a woman’s hand in the absence of sleeves. These accessories were ‘must haves’ to the cocktail dress well into the middle 1960s. If 2011 fashion has its way similar accessories, with the replacement of spike heels instead of matching shoes will capture the imagination of modern women, who covet the elegant, feel- good femininity that these accessories can convey to their sophisticated fashionable appearance. CONFECTIONS OF IMAGINATION
Those small extravagant cocktail hats are often decorated with romantic frills upon it including beads, jewels, sequins, flowers or feathers and very often have a peak-a-boo veil. They are closely related to fascinators, which are extremely charming hairpieces, decorated with feathers or flowers and worn on the side of the head. Most fashion stylists advise that the sophisticated little cocktail hat should be perched forward on the head, often at a titled jaunty angle, over one eye---so sexy and flirty. These witty hats contrast perfectly with the immaculate, polished groomed look today. No other hat in history has beguiled and provided a look that is so feminine, romantic, and seductive.
Double Model Image Photo by Sandy Ramirez
Posted by Polly Guerin at 9:25 AM