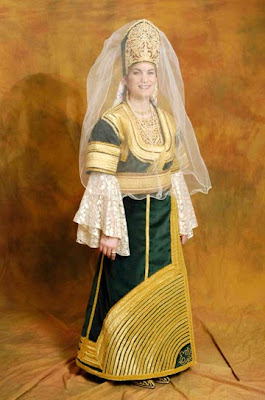 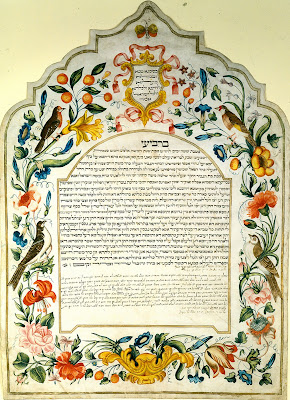 What could be more binding, more permanent a document than the legendary “Ketubbah” a marriage contract? The ancient Ketubbah was not merely a legal document it became a splendid work of art, but it did not begin that way. It originated as a contract protecting the interests of a woman and her children. From the first simply decorated examples of these magnificent treasures, frequently embellished with decorative borders and fine calligraphy evolved with increasingly elaborate ornamentation with texts and decoration providing rich sources of information on the artistic creativity, cultural interactions, and social history of the communities in which they were created from Iraq and Iran to Italy and the Netherlands, and finally to the United States. Recently there has been a renewed interest in the formalities of the Ketubbah and celebrations that follow the traditional Berberisca ceremony.
THE ART OF THE KETUBBAH
Similar to modern marriage contracts of intent, the Ketubbah not only outlined the rules of engagement and the sacredness of marriage it was a symbol of pride and displayed in the homes of Jews, be they wealthy or poor, scholar or layman, living in the West under Christian governance or in the East under Muslim rule. The largest number of Ketubbot in ‘The Library of Jew Theological Seminary’ are from Italy, where the art of the decorated Ketubbah found its most beautiful expression during the seventeenth and eighteenth centuries under the influence of Renaissance and Baroque art. Thirty magnificent examples of marriage contracts from the Library from Egypt, Persia, Afghanistan and India are on view in the exhibit, “The Art of Matrimony” at The Jewish Museum, 1109 Fifth Avenue at 92nd Street, Manhattan. http://www.thejewishmuseum.org/.
BEFORE THE WEDDING
Before a wedding, the families of Jewish brides and grooms traditionally negotiated a marriage contract, a legal document that sets forth the husband’s obligations to his wife and specifies the monies due her in the event of a divorce or his death. By the seventeenth century they were richly decorated with figurative, floral, architectural, and geometric designs. Regional stylistic traditions developed, emanating from the two major centers of Ketubbah ornamentation, Italy and the Middle East. The Marriage Contract, 1816, pictured above reflects the custom of Jewish couples in Italy and Amsterdam of creating a secular legal document to confirm their financial obligations. Watercolor and gold paint on parchment. The decorative border of flowers and birds was characteristic of Ketubbot from Ancora, Italy beginning in the early eighteenth century.
NOCHE de BERBERISCA
The ‘Noche de Berberisca’ ceremony, which takes place during the week before a Moroccan Jewish wedding, is an intimate gathering of families and friends that precedes the wedding. It is enhanced with Sephardic songs, or Judeo-Arabic music, fashion, delicious dishes and pastries made with almonds and honey. The richest and picturesque Noche de Berberisca or Soiree de Henne means that the bride’s hands and feet are decorated in elaborate designs with henna (Henna is a red dye from crushed henna) to prepare the bride for leaving her family. In the Marriage Contract from Meknes, Morocco, 1896, two blessing hands are inscribed with Priestly symbolism, and also amuletic and protective connotations, especially popular in Morocco.
ENTRANCE OF THE BRIDE-TO-BE
The evening reaches its climax when the bride makes her entrance magnificently dressed in the Berberisca Traje de Panos, or Vestido de Berberisca (Spanish), or Keswa Elkibra (Great Dress in Arabic). *Note picture above. She also wears a gorgeous crown embellished with imitation or real gems. In this elaborate attire the bride-to- be is announced into the reception room and greeted by waiting family and friends. The event is enhanced with songs or singing and adulations (wailing noises) to show their happiness about the couple’s upcoming marriage. At this time the bridal presents may be displayed and tokens of adornment from bride and groom presented. The celebration is followed by a Moroccan tea and pastry reception. The traditional Moroccan Jewish Bridal celebration was part of The American Sephardi Federation’s exhibit “2,000 year of Jewish Life in Morocco: An Epic Journey.” http://www.americansephardifederation.org/.
SUMPTUOUSLY DECORATED MARRIAGE CONTRACTS HAVE BEEN INTEGRAL TO JEWISH WEDDINGS FOR CENTURIES AND REPRESENT A MAGNIFICENT EXPRESSION OF TRADITION IN JEWISH ART.
Posted by Polly Guerin at 7:52 AM