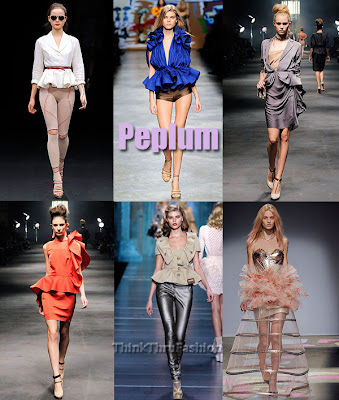 What can we say in favor of the peplum? “The dictionary describes it as a short full flounce—an extension of a garment below the waist covering the hips.” In one way it accents the waist and conceals a small tummy but in another more egregious way it just adds more fabric to a part of a woman’s body about which she is most sensitive.
POLLY'S OPINION In my opinion the peplum is a carry-over from another era and fashion designers' penchant to reinvent a woman’s figure. Whatever the reason, the peplum has re-emerged in red carpet fashion shows and while the look is stunning on model-like figures, if you are short or slightly overweight there is no way you should consider bringing more attention to your figure flaws than is necessary. So ban the peplum…but if you’re model-skinny the peplum is a charming new way to wear your fashion.
BLAME DIOR When the celebrated “New Look” made its debut in 1947 the picture of a fashionable woman presented a silhouette with nipped-waist jacket that had rounded hipline creating as it did, the dernier cri, hourglass silhouette. Full skirts, curves and slightly padded and nipped waistlines recall the elaborate designs of the 19th century. If you are a model-type like Kate Middleton, who has been spotted wearing peplum dresses, you can get away with wearing anything and it just looks perfect, but oh that flirty peplum gives me pause to reflect on my not-so-perfect figure.
THE CURRENT PEPLUM REVIVAL The craze for the peplum was more vividly popular on television in the 1980s. Remember the TV soap operas “Dallas” and Falcon Crest” and those female fashion victims with their broad shoulders and peplum silhouettes. Women viewers got the message and peplums were fashionable again. I ask you, “Is the peplum a reincarnation, a modernized throwback to the bustle of the Victorian era? Yet, for spring fashion collections pay homage to the peplum and for many women the peplum poses a problem. If you are not runway-model slim the peplum will just accentuate your hips and if you have a short waist the peplum only exaggerates how short your waist actually is.
KUDOS TO THE PEPLUM Some praise is needed to thank the peplum for accenting the waist and making it look smaller. It is a refreshing change in silhouette but I protest adding anymore fabric to my body than is necessary to look fashionably chic. However, there are still those fashionistas shoppers out there falling prey to the peplum craze, even if the look just doesn’t work for them. So I ask you. “Are they going to wear the peplum fashion to impress their girlfriends?” Believe me no man concerns himself about whether you are wearing the latest fashion trend; he is more interested if you are interested in ‘him.’ Yes, of course, darling you should look band box pretty, but consider seriously whether the peplum is right for your figure type.
NEED I SAY MORE…ADAPT FASHION’S LASTEST TREND WITH CAUTION!!!

Polly Guerin
www.pollytalk.com
pollytalk@verizon.net
Posted by Polly Guerin at 10:58 AM